Copycat Success – I did, the day I sold the MCG.

The day I sold the Melbourne Cricket Ground (MCG).

It all started back in late 2003 as I was driving through Richmond, Melbourne. At the time there was a complete redevelopment being done on the MCG Ponsford stand. A story I had just been reading about a guy called Paul Hartunian – an American who made a fortune selling pieces of the Brooklyn Bridge – was fresh in my mind.

To cut a long story short, Paul got his hands on the discarded wood from the Brooklyn Bridge renovations. Then, after distributing a press release with the headline “New Jersey Man Sells the Brooklyn Bridge… for 14.95”, he went ahead and cut the wood into pieces, sticking them to a homemade certificate.

As Paul puts it, “the phone started ringing like crazy; reporters were coming to my door. I was doing interviews for newspapers, magazines, radio shows, television shows. Every time an interview would run, more reporters wanted to do a story on the guy who was really selling the Brooklyn Bridge.”

Paul went on to make over 1 million dollars selling his $14.95 certificates!

…Now back to my story

As I was saying… I was driving past the MCG and I’m sure you can imagine, thinking about duplicating Paul’s success, it was like fireworks started in my mind.

Almost immediately I hopped on the phone, tracked down the wreckers and scored myself all the discarded MCG wood and carpet I could get my hands on.

Following in Paul Hartunian’s footsteps I sold the MCG… watch the video below to see what happened next.

I went on to get loads of media coverage: 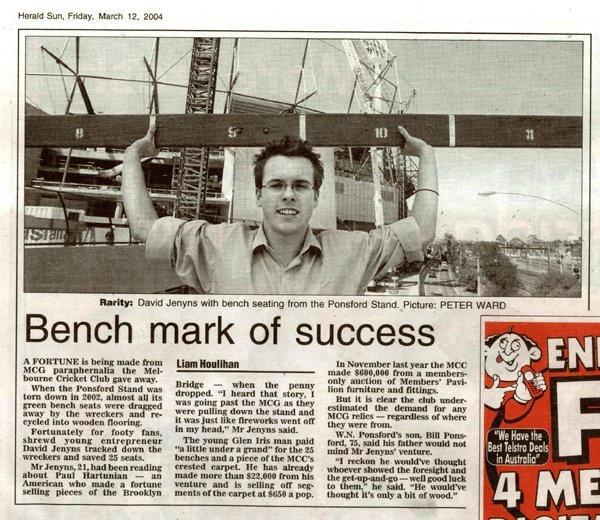 Of course, like any captivating story, that’s only the start… over the next few weeks I’ll tell you:

– How another young entrepreneur beat me to the punch.
– How the Herald Sun newspaper stodged me.
– and why the MCG sent me a cease and desist letter.

The astute reader will come to see there are many lessons to be learned in my stories.

The takeaway insight here is: “It’s ok to copycat your way to success.” Not only is it “ok”, I think it’s one of the smartest things you can do. In fact, I use a technique called “modeling”, a method of learning that occurs as a function of observing, retaining and replicating patterns of language and behavior observed in others.

But more on this another day… NOW GET BACK TO WORK!

Ps. Be sure to check out the website: www.owntheg.com